Arlington was built in 1905 for American Joseph Stillman Badger. Badger named the house Arlington in honour of the United States National Cemetery. He became known as ‘Boss Badger’.

Badger, a qualified electrical engineer, came to Brisbane in 1896 at the age of forty-five on behalf of the General Electric Company as its chief engineer to oversee the electrification of Brisbane’s out-dated horse-drawn tram network for the Brisbane Tramways Company (BTC).

After the sudden resignation of BTC project manager, Mr Walklate, due to ill health in 1897, the BTC directors approached Badger to become not only BTCs Chief Engineer but also as to assume the duties of General Manager as well. Badger consequently resigned from GE. A proud American , Badger named the house Arlington in honour of the United States National Cemetery. 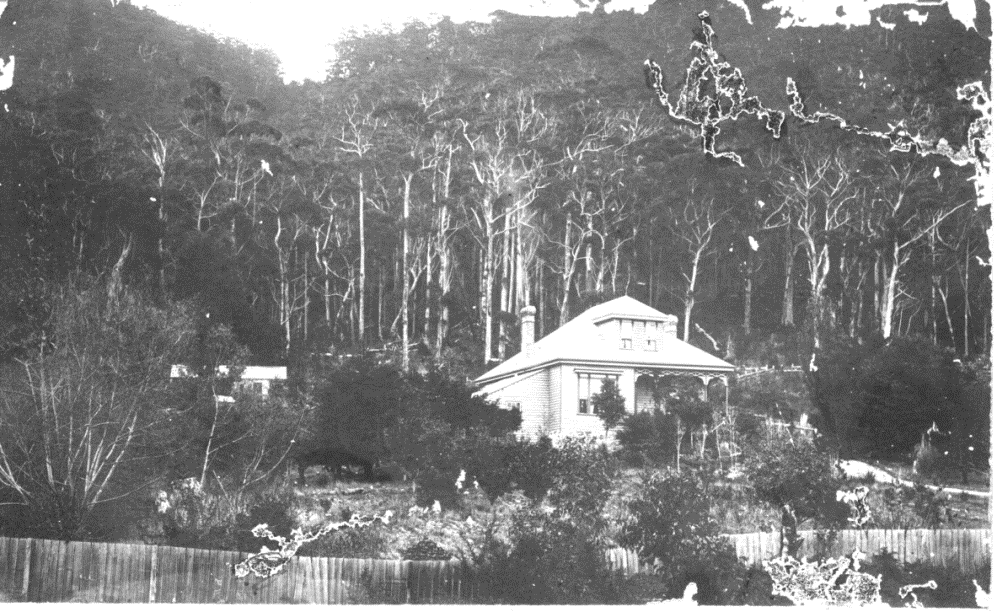 Well-known local Toowong resident Percival Hanlon, who used to work at the BTC workshop prior to assuming the lease of the Toowong cross-river ferry, always maintained that the house sat upon tram tracks which were used as bearers. Speculation and rumour circulated Toowong as to whether this story was correct, so when the property eventually came up for sale many locals attended to check this out for themselves. As Hanlon’s son, also named Percival (‘Percy’), later related, ‘I went under the house and there it was!’

Verification that Badger had used tram tracks as bearers for his house did not dispel speculation, but instead added to it. As a result, particularly more recently, locals wondered whether he was using his position at the BTC to cream off monies from the Tramway Company for his advantage. Badger acquired a reputation which could be described in common parlance as being slightly ‘smelly’ and eyebrows were slightly raised at the notion of Badger’s integrity. The speculation resulted in an article being written a couple of years ago in the local newspaper Westside News which described Badger as being ’notorious’, which was the first time such speculation actually was recorded in print as being a fact (and without any supporting primary documents or evidence). Formerly, it was suggested in verbal asides only.

However, reminiscences collected by TDHS in 2003-05 from several elderly former residents, aged between their late 90s to over the age of 100, do not include a suggestion that Badger had a tainted reputation. These included the childhood memories of99 year-old Len Hall in 2003-4 whose parents operated the local shop in Woodstock Road across the road from Badger. So the speculation seemingly appears to be more recent in origin, gaining more credence since the decade 2000-10 when the earlier generation of residents had by this time died.

To further investigate these innuendoes, TDHS examined the title deeds for the property. One person keen to know the truth was Percy Hanlon who did the legwork. The information was passed onto Badger biographer David Burke (then researching for his book titled One American Too many Boss Badger and the Brisbane Trams). David kindly provided the information that the names on the title deeds were board members of the BTC.

This implies that Arlington was financed by the Brisbane Tramways Company, possibly as part of an executive salary package, but Badger appears to have had a free hand in the house’s design as the architecture has an American flavour. It would seem that more than half a century later speculation fueled by ignorance has sullied Badger’s reputation. But at the time the house was built, the fact that the BTC owned the house was well-known, and hence no eyebrows were raised at the mention of Badger’s name at that time. Otherwise, why would the upper echelons of Society so admire Badger, socialize with him, queue up to pay patronage to him and do business with him? Badger’s business acumen was admired far afield, not only in Brisbane, but also in Sydney, Melbourne, and Adelaide and also as far afield as in London and New York.

Prior to living at Arlington, by 1900 Badger and his family (who had joined him from America) lived at ‘Belle Vue’, a large house and property on the hill in Miskin Street, just short distance from where the construction of the tramline along Milton Road to terminate at the Brisbane General Cemetery was in progress. This tramline opened on 22 July 1904. Then Badger moved his family to ‘Arlington’. This was when work commenced upon the extension of the tramline from the gates of Brisbane General Cemetery, down Dean Street, and into Woodstock Road to terminate at the (Toowong) Tram Terminus situated just near his front gate. The Toowong Council had campaigned to extend the tramway down to terminate at Toowong, and there were plans to build more termini along Sherwood Road. But to protect its suburban railway traffic, the Railways Department made sure the track was kept apart from Toowong station and so the extended tramline and termini did not eventuate.

Badger used a gate built into his side fence to walk down concrete stairs built into the steep slope of the ridge to access the tram stop near to his residence where his private tram collected him to go into work. Claims published recently (in 2018) by The Courier-Mail that the Woodstock Road terminus is built upon Badger’s property are incorrect, as the terminus has been built behind the footpath at the base of the hill upon the publicly –owned Miskin Street road reserve. 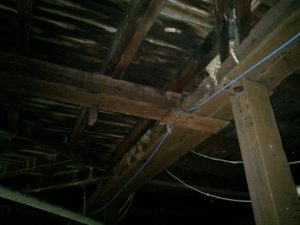 Steel tram track floor bearers in the undercroft of ‘Endrim’ (2016). 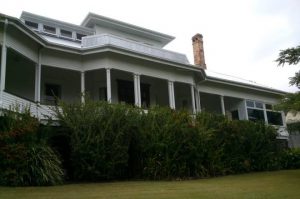 Badger was partial to moving. Between 1913-15, he moved again to Hargreaves Road, West End, and later elsewhere. He liked to move to an area where the tramway was being constructed so he was immediately upon the spot to supervise. Badger was very much hands on!

Due to both his role in the electrification and extension of the Brisbane tramway network and his hardline opposition to unionism and the role he played in the lead up to the General Strike of January 1912, the residence has ever since been associated with his name. However, people refer to it as Endrim, the name the property was later called, and not as Arlington.

Endrim has attracted more controversy lately with plans to build a childcare centre being lodged with the Brisbane City Council (BCC). Concerns have been expressed over a wide range of issues, with one being an expected increase in traffic and the another being the impact upon the heritage of the house.

Leigh Chamberlain and Lindy Salter, Toowong; A tram ride from the past, Toowong and District Historical Society Inc., 2018, p.124.
Leigh Chamberlain, Interview with Len Hall, ca. 2003
David Burke, One American too many. Boss Badger and the Brisbane Trams, Queensland Museum, 2012.
Certificates of Title and survey plans, Museum of Lands, Mapping and Surveying

Shirley Lahey’s grandparents leased ‘Sidney House’ in 1905 for a short period of time before moving to Indooroopilly. ‘Sidney House’, which boasted a prime riverfront position, was located on River Road (now renamed Coronation Drive) and has since been demolished. In common with many descendants of Toowong’s early families, Shirley has returned to the area and now lives in Taringa.

Shirley’s reminiscences include these family memories:

My paternal grandparents were David Lahey and Jane Jemima (née Walmsley). David was born in 1858 in County Westmeath, Ireland, and Jane was born in Maldon, Victoria, in 1860. They were married in Brisbane in 1881 and had twelve children. One boy died, aged one month. Another son died of wounds in France in 1917, during World War I. Of the remaining ten children, the best known ones are the eldest child, Vida (a noted Australian artist, art advocate and educator) and Romeo, who was known for his lifelong interest in national parks. This included his work towards the reservation of Lamington National Park and the Windsor Tableland and Upper Daintree area of the Daintree National Park as well as being the founder of the National Parks Association of Queensland, the first of its kind in Australia.

David Lahey’s parents and ten siblings migrated from Ireland in 1862. His father Francis was a farmer, first at Coopers Plains, and then at Pimpama, where he was a successful arrowroot farmer. His five sons became interested in sawmilling at Waterford and then, in 1884, David and three of his brothers built a sawmill in Canungra, which developed into the largest softwood mill in Queensland. Later mills were built in other parts of south-east Queensland. Initially, the partnership was called Lahey Brothers, the name later changing several times, but when the company went into voluntary liquidation in 1921, it was named Laheys Limited. Earlier, in 1910, David had set up a sawmill in Corinda, Brisbane, so that his sons would have business opportunities. This company was called Brisbane Timbers Limited.

When David and his wife came to Brisbane to live in 1899, they leased ‘Yeronglea’, the home of the late premier of Queensland, T.J. Byrnes, at Yeronga in Brisbane, where they lived until 1905, when they moved to Toowong and leased ‘Sidney House’, which had been built for Thomas Finney. I believe Finney was the partner in Finney Isles, the store that is now David Jones in Queen Street. The architect of the house (which was named for Finney’s wife, Sidney) was F.D.G. Stanley and its extensive grounds went down to the river.

When the David Laheys lived at ‘Sidney House’, there was a total of about twenty-five people under its roof. Apart from the immediate family, Jane’s mother, unmarried brother and at least one half-sister lived with them. Also there were some of David’s nephews (whose mother had died) and staff (who included a Kanaka who had worked for the Laheys at Pimpama and who stayed with them for the rest of his life, declining to return to his island home). From ‘Sidney House,’ they moved to ‘Greylands’ at Indooroopilly, which they leased for about three years, before building their own home at Corinda, which was called ‘Wonga Wallen’, near the sawmill.

An article featuring more of Shirley Lahey’s memories titled Sojourn in Toowong–the Lahey Story is published in Toowong: A Tram Ride from the Past, Memories of the Toowong Community Vol. 4, ed. Leigh Chamberlain and Lindy Salter, Toowong and District Historical Society, 2008, p.1.

To order a copy of Toowong: A Tram Ride from the Past, please see details on the Publications page.