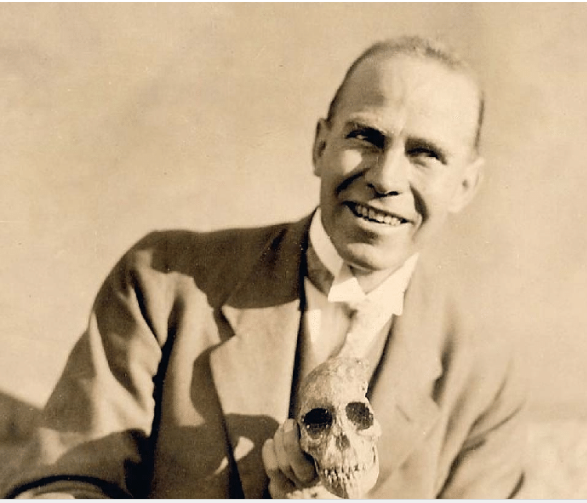 Researched and written by Peter McNally

Raymond Dart (1893- 1988) was an anthropologist and palaeontologist who realized that a fossilized skull he was examining in 1924 was the earliest example of primordial bipedal man ever found to date, thus proving beyond doubt that human ancestors evolved out of Africa. Dart named the species Australopithecus africanus, the ‘southern ape from Africa’.

Robert Broom (a Scottish doctor who became a professional palaeontologist in 1933 at 67, and who was a long-time supporter of Dart) paid this tribute to Dart:

Raymond A. Dart’s discovery and analysis in 1924 was one of the most important in world history.

Raymond Dart was born in Queensland, Australia in the inner western suburb of Brisbane on 4 February 1893. He almost didn’t make it as he, his mother, and her midwife had to be rowed to safety after he was born from the family grocery store in Sylvan Road, Toowong during one the Brisbane River floods of that year. He was the fifth born of nine children of Samuel Dart, a Queensland-born storekeeper, and his wife Eliza Ann, née Brimblecombe, who was born in New South Wales. He had seven brothers and a sister.

Despite being born in Toowong, Dart was raised mainly on a dairy farm near Laidley. His early education was at Toowong State School, which was then located in Aston Street, Toowong. He also attended Blenheim State and Ipswich Grammar schools. He later attended newly established The University of Queensland where he graduated with a Bachelor of Science on 17 April 1914 and a Master of Science, First Class Honours (in Biology), 10 May 1916. He later spent four years at the University of Sydney, studying medicine. All these qualifications were achieved before his 25th birthday.

After graduating, Dart left Australia and served in the medical corps as a captain and medic in the Australian Army in England and France during the last year of World War I. In 1920 Dart was appointed as a senior demonstrator at the University College, London at the direction of Grafton Elliot Smith. A famed anatomist and anthropologist, Smith was regarded as THE eminent anatomist in Britain. Interestingly, Grafton Elliot Smith, who was also a fellow Australian, had moved from Grafton (as in his name), New South Wales, to take up a position in London.

Dart then travelled to Washington University, St Louis, Missouri on a Rockefeller Foundation Fellowship, and then returned to his position at the University College, London,

In 1922, Dart left Britain to take up the position of Chair of Anatomy at South Africa’s newly established University of Witwatersrand’s fledgling Faculty of Medicine (sometimes called ‘Wit’s’ University). He was reluctant to do so, but agreed after encouragement from Elliot Smith and Scottish anatomist and anthropologist Sir Arthur Keith FRS, who was professor of physiology at the Royal Institution of Great Britain from 1918 to 1923 at the time. Dart was just 31 years of age.

In 1924, one of Raymond’s students brought him some quarry rubble containing a skull. After Dart painstakingly cleared away non-essential debris around the skull, he declared : In my opinion it is not a young chimpanzee, as many scientists have suggested. I believe it is a crossover between an ape, and a human, possibly a human ancestor.

Raymond named his skull the ‘Taung Child’ after where it was discovered. Dart then presented his findings to the scientific journal Nature, who published his report on 7 February 1925.

Eventually, the skull turned out to be the earliest example of primordial, bipedal man ever found. It also proved beyond doubt that human ancestors evolved out of Africa.

Back in 1925 Raymond claimed that this genus of hominid would have had a posture and teeth similar to modern humans. It also had a small ape-sized brain. Most importantly, Dart, being an anatomist, knew that the position where the vertebrae entered the skull meant it was bipedal.

Dart’s conclusions were met with hostility from other many anthropologists. It must have been disappointing for Raymond to be challenged by Grafton Elliot Smith, his own professor and mentor, who stated, ‘The Taung skull was more likely to have been a chimpanzee, not a human ancestor’. After a number of years, a disenchanted Raymond gave up searching for fossils, and went back to teaching.

Dart had accepted the science of the time, that the earliest human ancestor was indicated by the discovery of Piltdown Man’s skull. It was found in 1912 by amateur archaeologist Charles Dawson in Pleistocene gravel beds near the town of Piltdown in Sussex, Britain, and was regarded as the earliest known record of a pre-human fossil. This proved that human ancestors evolved out of Europe. Grafton Elliot Smith, one of the anthropologists that Dart had observed and admired while working in London, was later called to the town of Piltdown to help reconstruct pieces of the skull that had been found there.

The Piltdown Man was later exposed to have been a hoax, one of the biggest frauds in anthropological science history. The general public were horrified to find out that the hoax had taken place, and even more concerning, that it took 31 years for the deception to be discovered. Today, after much investigation, the fraudster has not been named.

After witnessing the Dart experience following the discovery of the ‘Taung Child’, Robert Broom, a doctor and anthropologist, became interested in the search for human ancestors. He explored dolomite caves in South Africa, particularly Sterkfontein Cave (now part of the Cradle of Humankind World Heritage Site). Twelve years later, while continuing his exploratory digs, Robert Broom, found an adult female skull of the ‘Taung Child’s’ genus among other fossils in 1936.

Robert Broom’s discoveries of further Australopithecines (as well as Wilfrid Le Gros Clark’s support) eventually vindicated Dart, so much so that in 1947, Sir Arthur Keith, who had publicly disputed Raymond’s claims, in 1947 made the statement: ‘…I was wrong and Raymond Dart was right!’

Dart, who recalled that back in 1871 Charles Darwin had stated, ‘It was more probable than not, human ancestors evolved out of the African continent’, had the historical sense to remind the world of Darwin’s words. Thus Raymond Dart’s second distinction after realising the significance of the ‘Taung Child’, was that he had turned Darwin’s ‘Probable’ into a ‘Definite!’

Another major contribution by Dart was that he established Witwatersrand University as the epicentre of human evolution science, research and achievement. The Institute for the Study of Mankind in Africa was founded in his honour.

Others who have followed in his footsteps have been Professor Phillip V. Tobias, Dart’s long-time collaborator, successor and biographer. Tobias died in 2012 aged 86. Currently, Professor Lee Berger is a major contributor to ‘Wit’s’ research. In 2013, he and his large team discovered the biggest primitive hominin assemblage in history. Another is Professor Ron Clark, the man who found an almost complete skeleton of a 3.67 million year old human ancestor. It was named ‘Littlefoot’. Berger and Clark, as well as many others, are continuing the tradition of Raymond A. Dart’s work.

Peter McNally, the author of this article, was born in Adelaide, South Australia in 1940. In 1975, Peter, his wife Judy, and their three sons moved to Queensland and over the past 25 years have lived in Brisbane, within 15 kilometres of where Raymond was born.

Thank you to Peter for sharing his research with the Toowong and District Historical Society Inc., and for giving permission for his article to be published.