Ventnor Street (which came off Church Street, now Jephson, beside the Salvation Army Girls’ Home) continued through to St Osyth Street. Halfway along on the northern side of Ventnor Street was a blacksmith. Most of the boys walking to and from school stopped to watch the blacksmith at work, with the bellows boosting the heat of the fire. This was to heat the metal, including horseshoes, which were hammered into shape on the blacksmith’s anvil. Behind the blacksmith’s shop, and fronting on to Sylvan Road, was the Toowong Municipal Chambers with, I think, a captured WWI Maxim machine gun on the side veranda.

Keefers’ Store, on the corner of the eastern side of Jephson Street and Sylvan Road, was a two-storey building with a residence on top. The western wall of the building was painted dark blue, with a large drawing of a packet of Goldenia Tea emblazoned thereon. 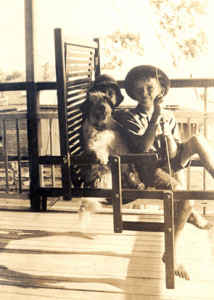 Giving the dog a swing! Children (thought to be Stuart Roden and his sister, Eleanor) enjoying themselves in the swing chair made by their paternal grandfather, Per Olaf Roden. Photograph taken on the front verandah of the Roden residence at 8 Augustus Street, Toowong. [Courtesy of Stuart Roden.]

Toowong Park was the place to fly kites to great heights and also to toboggan down the hill from the old War Memorial. This was at the top of the hill in the middle of the park. The long grass bent over, providing a smooth fast run to the bottom of the hill near the north side of the sports oval. The Rugby Union field in Toowong Memorial Park was firstly a Rugby League field. My father refereed there until he joined Toowong Bowls Club. Also he used to run up Mt Coot-tha every morning so he was pretty fit. I played Rugby League as an inter-school sport for Toowong State School until it was banned as a school sport by the Education Department authorities. Then the sport played by the school was Australian Rules, so I played this. The games were played at what is now Oakman Park, as well as on a small park below Taringa State School. We also played at Graceville Park and at Sherwood and Corinda Schools on the school ovals. We played Indooroopilly State School at the fields off Lambert Road.

Today the creek is now mostly piped underground. It has its source somewhere in the area which is now the Botanic Gardens. Then it was an open drain and it ran along its valley through the present roundabout, to St Osyth Street which it crossed between Sylvan Road and Croydon Street. And then it crossed Croydon Street and continued to Bayliss Street (formerly Isaac Street) and then flowed past the Chinaman’s market gardens, which grew vegetables. The market gardens were on the north side of the creek, more towards Auchenflower.

The size of the market gardens was a couple of acres — a fair size. The gardener used to fill two large watering cans with water from the creek, the cans being balanced on a yoke that he bore on his shoulders and neck. He just tipped the cans to water the plants, according to plan, and watered the whole of his vegetable garden in this way. Salad vegetables from this source were always washed under the kitchen tap before eating and somehow we all survived.

There was a footbridge across the creek (south and west of the oval) and a vehicular crossing halfway along the south-side of the oval. The creek wended its way to where a small rugby field is now, and under a trestle railway bridge (now an embankment) underneath Land Street and part of Moorlands Park, under Coronation Drive (which was called River Road) to the river. There was a grate across the creek here. 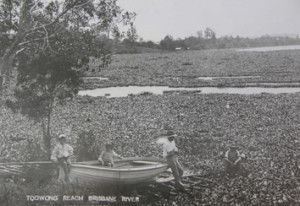 Water hyacinth-covered section of Toowong Reach on the Brisbane River, around 1910 Courtesy of John Oxley Library, State Library of Queensland

From time to time, when in flood, the creek flowed across St Osyth Street. I can remember Freddy Bennett, the headmaster at Toowong State School, coming down to the swiftly flowing waterway in the lunch hour and ordering the boys who were mucking around in the water back up to the school — with the threat ‘of the cuts’ if they didn’t move quickly!

Underneath the old two-line rail bridge across Sylvan Road was a hollow which filled with water during the 1931 floods. While crowded with swimmers, a young lad drowned, probably after hitting his head on the bottom.

Thank you to Stuart Roden for sharing these memories.

Read more of Stuart’s recollections in the Toowong and District Historical Society’s publication, Toowong: A Tram Ride from the Past, p. 28. To order see details on the Publications page.