Blog
You are here: Home1 / Blog2 / Uncategorized3 / Christmas at the Walker and Roberts households

The Walker and Roberts families lived next door to each other in Sylvan Road, Toowong. Cecily Walker moved to here with her parents in 1929, while her cousin Erl Roberts and his family, didn’t come to live there until the 1940s. Erl was born about 15 years after Cecily.

When Erl and Cecily were interviewed in 2003, Erl provided the following memories of how his family celebrated Christmas during his childhood (from the mid-1940s to the early 1950s). Erl remembers:

I can remember the ice cream—people considered it a treat to obtain ice cream but there was no way of keeping it without freezers. We eventually bought a big flash refrigerator called a ‘Silent Night’. It had a freezer and then, of course, Mum could make ice cream. You could buy a cardboard cup of ice cream like Peters from the shop next door and take it home. You couldn’t buy chicken commercially like it is now. It was something you had at Christmas and Easter.

We used to go to Maroochydore. My grandparents on Mum’s side, the Smiths, had a little house they owned at Maroochydore and so Mum and Dad had the old Chev ‘ute’ (which we covered in at the back for holidays) and we’d take most of the baggage up there. We used to stop at Burpengary on the way up to have a cup of tea and a break. 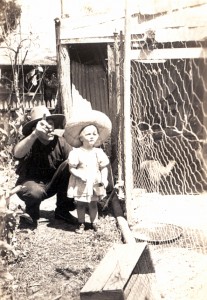 Dad used to kill the chooks, then we would pluck them, clean them—and those sort of things! Dad used to get young chicks and fatten them up for Christmas and Easter. Of course, I used to give them all names and got to love them all—nurse them and everything. And then the time would come! ‘You can’t kill Susie!’; ‘You can’t kill Betty’ and ‘You can’t kill Sebastian’. And he’d have to go and buy a chook! He spent all those months fattening them up and then he had to go and buy one! Uncle Dick used to buy the chickens from the Chinese market gardener down at Sylvan Road. You could buy ducklings from him and day-old-chicks.

An article featuring Erl Roberts and Cecily Walker’s memories of Toowong titled Cousins Share Memories of Toowong is published in Toowong: A Tram Ride from the Past, Memories of the Toowong Community Vol. 4, ed Leigh Chamberlain and Lindy Salter, Toowong and District Historical Society, 2008, p.14.

To order see details on the Publications page.