Blog
You are here: Home1 / Blog2 / Uncategorized3 / Recollections of Toowong Hardware in the 1950s and 60s 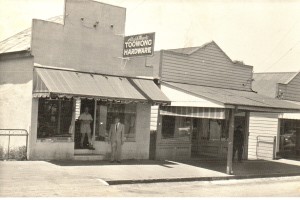 Toowong Hardware on Sherwood Road: Alan Maguire in the suit

It left timber and builders’ supplies to Patterson’s Sawmill located on the opposite side of Sherwood Road down towards the Toowong Station. I guess its clients were mainly home handymen. My father was a very practical man so he carried out repairs to bicycles in particular.

It was essentially a one-man business. I do not recall any other permanent staff in this first store. My father provided the customer service, except for Saturday mornings and school holidays when my older brother, Adrian, and I helped out.

All items were priced by hand and carried tags which included an alphabetical code below the price. This code indicated the wholesale price for the item. It was based on the words ‘CORN FLAKES’ from memory, where each letter represented one of the ten numerals, 0..9 or 1..0. I cannot recall which, but feel more confident about the first of these. So ‘OC/L’ could have represented 12/6d. This was especially helpful at stocktake time when the value of the present stock had to be calculated: a task which meant that every item in stock had to be counted. There were no computerised inventories at this time. All bookwork was by hand.

The store was generally full-service, which is typical of the time. Some self-service was possible, but most items required staff assistance. Items were brought back to the counter at the back of the store and paid for there. Totals were rung up on a mechanical cash register. It was mainly a cash business, way before credit cards were thought of. I think that some accounts were operated on occasions.

There were no pre-packs as in today’s stores. We used balance scales to weigh out quantities of items such as nails while bolts and nuts were sold either in carton lots of one gross or individually. Kerosene and mineral turpentine were sold from bulk storage tanks in the store into clean beer bottles or other containers. These containers may have been about 20 gallons in capacity.

I still remember my father collecting empty beer bottles in the store and taking these to a firm called Busbys in West End to have them cleaned and returned to us for future use. I may have this name wrong as I cannot find evidence of this firm in my research. We stocked a fairly full range of paint as well.

Saturday mornings were very busy days for motor garages in those times as motorists filled up for the weekend before they closed at midday. The bowsers were mechanical and hand operated. The attendant had to pump the petrol by hand up into the glass sided ‘tank’ above it. This was calibrated in gallons and fractions on the side. When released, the petrol flowed through the delivery hose by gravity into the car’s petrol tank. The operator checked the oil, water and tyres as part of the full driveway service.

Saturday mornings were also very busy times for the hardware store. There was a lot of activity in our little corner of the world.

After a few years, the owners, The Shell Company, ended my father’s lease and forced my father from the premises so they could expand the Garage to cover the entire corner block. My father took a very dim view to this. I am not sure if his lease was broken by Shell, but he was highly critical of Shell from then on.