WILLIAM and MARGARET WINTERFORD
Regatta Hotel, Toowong (1882–1897)
William Winterford (1834-1919) was the second son of James and Elizabeth (nèe Gillet) Winterford, Publicans of Shepreth, Cambridgeshire, England. William was christened “Levi” in All Saints Church, Shepreth, on 1st June 1834.
William came to Australia in 1855 on the ship Ballarat arriving at Port Phillip Bay. Records indicate that William paid £18/2/6 as the fare. It would appear that at that time he had no particular trade or calling as he was listed simply as a Gentleman.
William followed his brother John and sister Eliza Gillet Edds who came to Australia as assisted immigrant’s on the Thetis in1849.
William and John are believed to have had a Bullock dray business along the east coast of Australia and we know they were both in Rockhampton in 1863. It may be that John and William were attracted to the area by the Canoona Gold Rush of 1858.
William married Margaret Hannah in Rockhampton in 1863. Margaret was born in Glasgow, Scotland on 11/01/1844)
William’s profession was listed on his marriage certificate as ‘Bushman’.
The newly married couple headed south to the Logan River area which had been opened up for settlement in 1824 and where cotton was now being grown.
It is apparent that John Winterford went his own way prospecting and was to drown alone in a flooded creek near Nockatunga Station in 1882.
William and Margaret Winterford lived and worked in the Logan River area until 1870, when they moved onto their own selection at Pimpama. During their years at Logan River, they started a considerable family.
Arthur James was born on The Albion Cotton Company’s Plantation, Logan River on 8th May 1865. Elizabeth Wilhelmina was born on 14th March 1867 at Logan River. Mary Ann was born at Gympie on 13th December 1868.and Walter John was born at Logan River 11th August 1870.
The family of six took up residence on Block 173 at Pimpama, where in June 1870 William had also selected the adjoining block No.256. The Homestead block, No.173, was 80 acres of first class agricultural land, while the adjoining block 256, consisted of 188 acres overall and made up of 80 acres of agricultural land and 108 acres of second class pastoral land. Record has it that William improved his Homestead block 173 with the construction of a 4 roomed bark house with a bark roof, also a large slab building containing a barn, a cart house and a store, with a roof of bark. There was also a bark hut for workmen. Eleven acres were cleared and fenced with a sapling fence. The crops planted were sugarcane and maize. He also had a few cattle on the property.
On the second block, 15 acres was cleared with10 acres under cotton and the other 5 acres planted with sugarcane. On this block he constructed 30 chains of sapling fencing.
During this period in Pimpama the Winterford’s managed to increase their family with another four children being born. On 25 May 1872, a son, William Henry was born, and on 19 October 1873, another son, Alfred Edwin, arrived. The next arrival was a girl, Alice Louisa, who was born at Pimpama on 12 April 1875.
Another daughter, Beatrice Selina was born 8th December 1876 and in 1878, yet another daughter, Florence Emily, was born on 23 August at ‘The Valley’. It is assumed that the reference is to Fortitude Valley in Brisbane.
William Winterford obtained a Retail Spirit Dealers License in December 1879 for the Beenleigh area and operated his first liquor license at the Ferry Hotel (built in 1871) at Yatala on the Albert River.
William also acquired the Wharf Street Brisbane premises in 1879 which accommodated the family and operated as Public House.
Another addition to the family, Maggie Hannah was born at Yatala on 5 October 1882.
During this period William purchased the original Regatta Hotel on the Brisbane River at Sylvan Road in Toowong.
In 1886 William had great plans for his old wooden hotel. It was removed from the site to make way for a completely new development. He commissioned the architect Richard Gailey to design a much larger building to blend with its position on the bank of the Brisbane River. George Gazzard carried out the construction at a cost of £4,800. The finished product was outstanding in every respect. The new
Regatta Hotel was officially opened in 1887 and enjoyed good trading for 10 years in spite of the big flood of 1893 when the Brisbane River broke its banks. 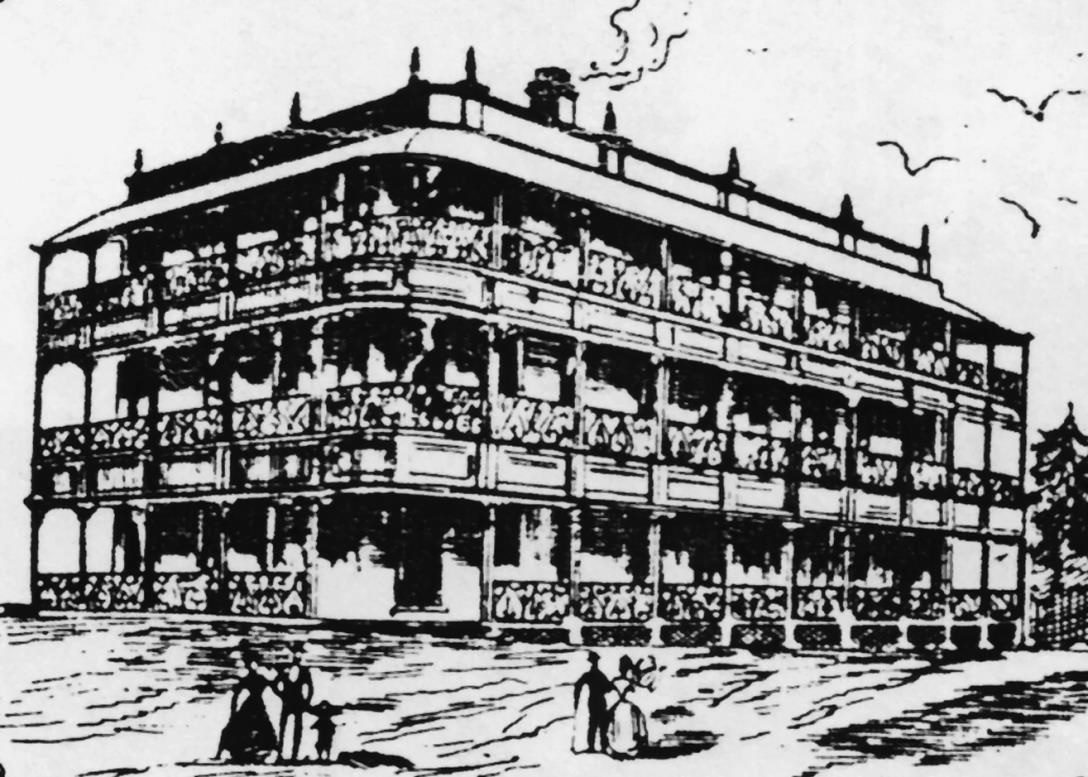 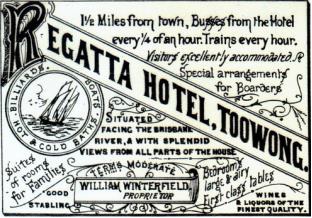 Another daughter, Clara Isabella was born in Brisbane on 29 May 1884. Unfortunately Clara died three months later on 28 August.
1892, the year before the big flood, was a big occasion for William and Margaret. Their eldest daughter, Elizabeth Wilhelmina, was the first of their children to be married. The wedding was celebrated on 11 March 1892 when she married Thomas Henry Haynes, a pilot at Bulwer Island.
Another wedding was to take place the following year when the eldest son, Arthur James, married Lizzie Elmes on 4 January 1893. 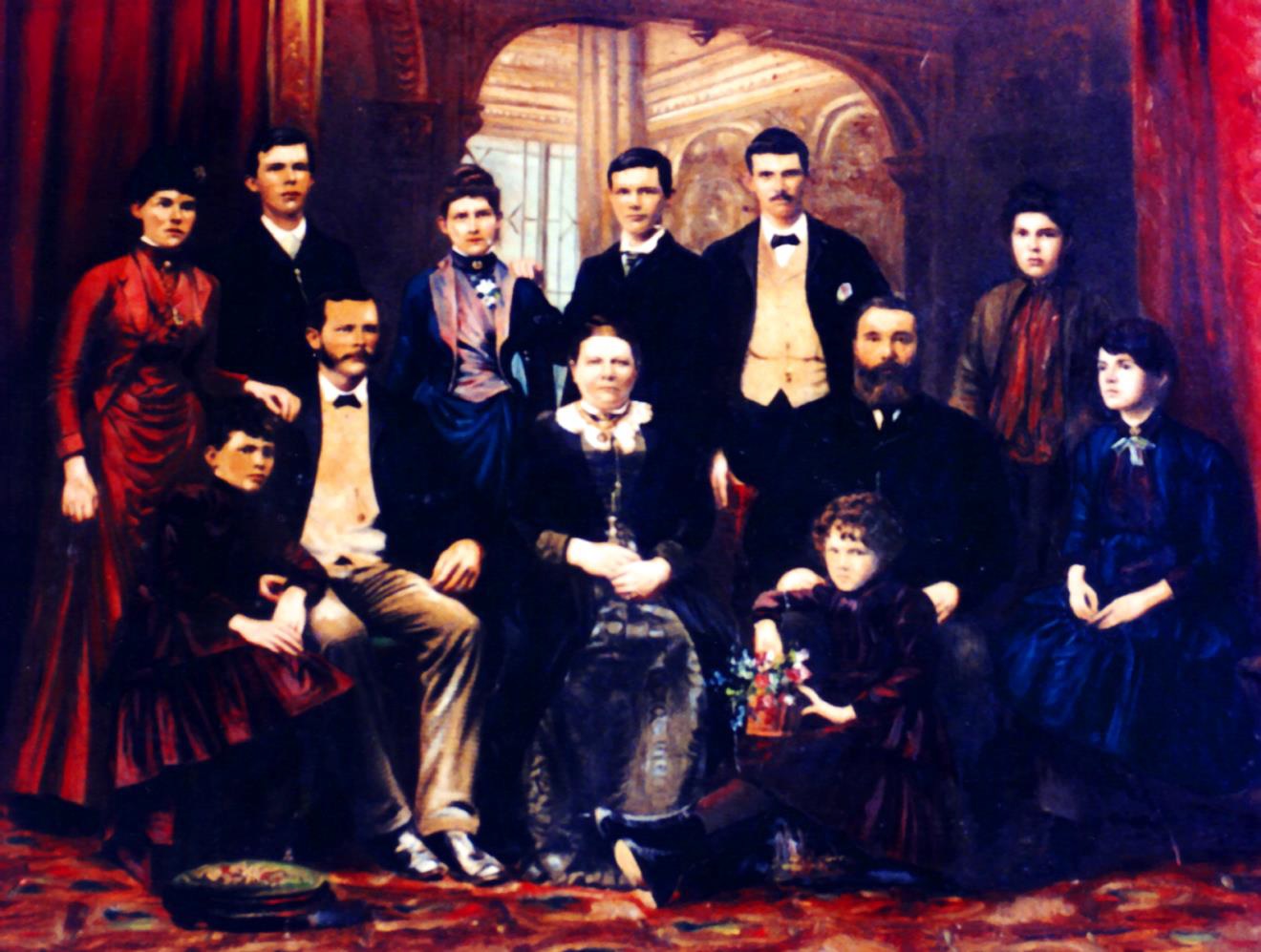 Winterford family
(Photograph taken in the Regatta Hotel, Toowong in 1891 or 1892)
Standing from left to right: Mary Ann, William Henry, Elizabeth Wilhelmina, Alfred Edwin, Walter John and Alice Louise.
Seated from left to right: Florence Emily, Arthur James, their mother Margaret, and father William with Beatrice Selina on the extreme right.
The youngest daughter Maggie Hannah is seated in front of her father.

The date and place of birth of each of the above children is as follows:
Arthur James: 8.05.1865 at Albion Cotton Company Plantation, Logan River.
Elizabeth Wilhelmina: 14.03.1867 at Logan River.
Mary Ann: 13.12.1868 at Gympie.
Walter John: 11.8.1870 at Logan River.
William Henry: 25.05.1872 at Pimpama.
Alfred Edwin: 19.10.1873 at Pimpama.
Alice Louise: 12.04.1875 at Pimpama.
Beatrice Selina: 08.10.1876 at Pimpama.
Florence Emily: 23.08.1878 at Valley. (Possibly ‘The Valley’, Brisbane)
Maggie Hannah: 05.10.1882 at Yatala
Two other children William and Clara Isabella did not survive.
Ten years after the official opening of the Regatta Hotel, there was a downturn in trading, which resulted in the hotel being forfeited to the Mortgagees.
Following the loss of the Regatta, the family moved to the Clarence Hotel in South Brisbane. The move took place in 1897. It was from here that two sons, Alfred Edwin and William Henry, enlisted in 1899 in the Queensland Mounted Infantry, for service in South Africa during the Boer War.
The turn of the century in 1900 was not a good year for the family. Alfred Edwin and William Henry were in South Africa fighting a war, and while they were away, the family lost their mother, and William, his wife of 37 years, when Margaret died on the 3rd of August.
Sergeant A.E. Winterford arrived back in Brisbane with his contingent from South Africa on 3 May 1901, and on the 10th of May, the unit was disbanded, leaving him free to resume civilian life. He returned to the
Public Service as a Crown Land Ranger. On 30 October 1901, there was another wedding being celebrated, when he married Margaret Brereton Robinson in St John’s Cathedral in Brisbane.
The next family wedding was to be celebrated in 1904 when Walter John married Clara Jane Arthur, (nèe Cowl) in Broken Hill. Walter John was active as a miner in Broken Hill for some 35 years and was President of the Barrier Workers Association during a period of turbulent workers disputes.
Alfred Edwin resumed military duties during World War I, attended Duntroon and was promoted to Lieutenant. He was killed in action in France on 10 June 1918.
The interesting life of the family’s foundation member came to a close in the following year when William Winterford died in the Diamantina Hospital on 6 April 1919, and was buried in the Toowong Cemetery the day after. He was 84 years old.
William and Margaret’s descendants are now spread throughout Australia and number in the hundreds. The Regatta Hotel is now heritage-listed and is one of the iconic hotels of Brisbane.

Notes
Some have suggested that Mary Ann and Elizabeth Wilhelmina have been incorrectly positioned in the above caption. I suspect that they are probably right, but leave it to others to decide and comment. I have enclosed some additional pictures below to assist such decision.
Hopefully there are some better pictures to help us. 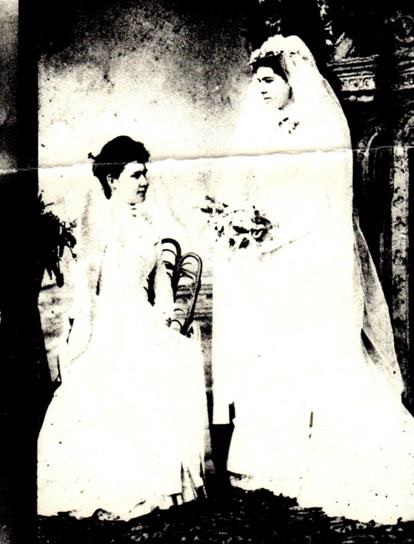 The history of Coorparoo. Our guest speaker is retired heritage architect and President of the Coorparoo and Districts Heritage Group, Ron Baker, OAM