You are here: Home1 / The McIlwraith Croquet Club celebrates 90 years!

For more information on the McIlwraith Croquet Club, please visit their web site at:
www.mcilwraithcroquetclub.com

On September 28th 2013, the McIlwraith Croquet Club, in Auchenflower, celebrated its 90th anniversary with an afternoon tea at the clubhouse. Members and guests were welcomed by the President, Mrs Sandy Ridgway, and the club committee.

Amongst the guests were Ms Saxon Rice MP, member for Mount Coot-tha, who unveiled a plaque commemorating the 90th anniversary, and Mr Peter Matic, Brisbane City Councillor for the Toowong Ward who planted a tree.

Present among the gathering was 90 year old Mrs Roma Dawson, the oldest club member. One of the members, Mrs Francis Wregg, read her poem on the club’s history. The President’s Cup was presented to Mr Peter Nicholson winner of the Golf Croquet Championship. A second cup was presented to the winners of the Doubles Golf Croquet Championship, Mrs Gill Anderson and Mr Eddie Atkinson. The BrizWest Concert Band provided musical entertainment throughout the afternoon. A souvenir booklet, McIlwraith Croquet Club celebrating 90 years of playing croquet (1923-2013), was given to guests.

You can view a snapshot video of the BrizWest Community Ensemble by clicking on the image below (opens in a new window). 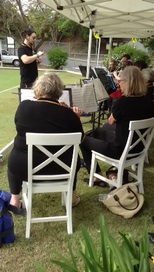 Photos of the local area from the collection of Sir Arnold Bennett presented by Nick Feros.

Members will be notified in advance of any changes to these dates.

For enquiries, RSVP and apologies telephone or text a message to 0401 180 092 or send an email to tdhsoc@gmail.com