Blog
You are here: Home1 / Blog2 / Uncategorized3 / Recollections of Toowong Hardware in the 1950s and 60s

On the other side of Sherwood Road: Suitable premises were found and leased on the opposite side of Sherwood Road, about half way down to the Station. From memory, the owner was a (George) Gittoes who lived and ran a store next door across a lane to the west of the new store. Perhaps it was a cake store. This was more the ‘business’ side of Sherwood Road with Patterson’s Sawmill, a post office and Commonwealth Bank. I vaguely remember a chemist and dress Shop as well.

Toowong Hardware carried on much the same as in the past, although I think it had more limited space to operate. The storage area was ‘out the back’ of the service area in the front. The photo shows a fairly small storefront. My uncle, Eric Maguire, seems to have become employed on a permanent basis during the latter part of this tenancy. 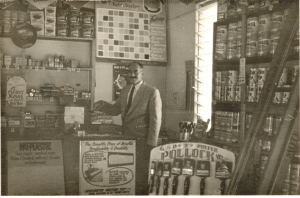 However, there were three innovations in this period which impacted greatly on customers and the hardware business. The impacts have persisted to this day.

Paint at this time was mainly turpentine-based. It was thinned with mineral turpentine. Brushes were cleaned up in the same liquid. Drying time was up to 24 hours. But this enamel was pretty tough and glossy. It required primers and undercoats before application, especially on timber.

A paint store was forced to stock a wide range of colours in a range of sizes e.g. gallons, quarts, pints, ½ pint and ¼ pints, to try to match customer wishes. If they stocked more than one brand, the shelf stock increased markedly. This meant that less popular colours and sizes stood for some time on the shelves; even for years in some cases. The sediment settled to the bottom of the can and became very hard and time consuming to mix to a usable consistency. After some time the paint spoiled and was unsaleable.

The first innovation revolutionized the way paint is bought and marketed up to this day. In around 1960, Robbialac Paints introduced ‘paint colorizers’, plastic syringes of paint tints, which were added, generally to white-based paints, to give a full range of colours. In those days the tint was added by the customer while today the tints are dispensed by machine.

This meant that the store had to hold much less stock and it was always fairly fresh. It also made it possible to increase the range of colours in the range as different combinations and quantities of the basic tints were virtually infinite. Colours were defined by combinations of tints and syringe sizes, depending on the can size.

The second innovation was ‘plastic’ paint. This forerunner of acrylic paint revolutionized painting. The paint dried in minutes on a warm day. Brush strokes faded as the paint dried to a ‘flat’ finish. The brushes cleaned up with water. Robbialac Colorizer paint was plastic based so this was really a revolution. It excited my father very much. A 1960 Youtube video clip shows an advertisement for the Robbialac Colorizer.

The third innovation was the manufacture in Australia of a light weight rotary mower. In 1952 Mervyn Victor Richardson commenced manufacturing the crude two-stroke powered Victa Motor Mower in a shed in his backyard at Concord in Sydney. The rest is history.

It sold for £49 18 shillings. It had an 18-inch cut. It turned ‘weeds into lawn’. It made short work of all the stalks which the traditional ‘reel’ mower had so much trouble with. Within a few years, Dad was approached to become one of the first seven Victa Agents in Queensland. He accepted. We finally had a mower that could tame our large Tarragindi ‘lawn’ after we returned from our three week holiday in January. In this time the lawn had become a jungle in the typically cyclonic season.

At first the mowers sat on the floor with little interest to customers. After a period of time and many home demonstrations, they became much sort after. They needed to be ordered and shipped into the store. Once a week a ‘truck load’ was delivered to the store to be delivered to customers after the store closed on Saturday at noon. My father purchased a three-wheeled motor scooter, a Lambretta, with a tray on the front to deliver and demonstrate the motor mowers. Business boomed. I think Dad was quite a sight as he drove across town and around the area at that time.

I received some profitable regular mowing contracts from customers in the Toowong area at the time. I helped out with some of the servicing and repair work on the Victas. I also did repair work on bicycles. I remember taking the buckles out of bicycle wheels by adjusting tensions on the spokes with a specula tool.

Creating a solution to a problem: My father serviced the bulk of the mowers he sold and discovered one nagging problem with their design. The thin steel blades wore out fairly quickly. They were very difficult to replace because the bolt heads were generally worn down so much that a spanner could not be used to hold them while the nut was removed from above the cutting disk.

My father tried to help fix this problem by using bolts with narrower heads. They still wore down as they were below the level of the blade and continuously rubbed on the lawn and rocks and sticks if these were present.

His solution was to invent a new cutting disk (plate) with blades inclined at such an angle that the tip of the blade was below the bolt head. This increased the power of the mower because there was less friction on the blade as well as saving the bolt head and increasing the life of the blades many times over.

He patented the idea in Australia, New Zealand, the UK and the USA. He marketed the mowing plate as the Magic Carpet mower plate since it gave the mower a ‘magic carpet ride’.

All good things come to an end. The start of the death knell for Toowong Hardware was the opening of Kratzman’s Hardware in High Street, Toowong during this lease. Its’ greater financial backing was probably the major reason why my father could no longer compete at the same level with its hardware and paint.

The Jubilee Theatre site: As business declined further, my father relocated the business to a small space in the Jubilee Picture Theatre in Jephson Street. It was very limited in stock and space. I think that my father thought he could continue on there while he grew the sales of this Magic Carpet plate which was manufactured to fit a range of mowers.

He continued to employ my uncle to run the store while he promoted his Magic Carpet ‘plates’ through selected agents and at country shows. Maleny, Allora and Crow’s Nest Shows were particular favourites of his. He loved to socialise and meet with people and to demonstrate his product. My grandfather, Fred Maguire, walked down and back from his home in Taringa on many days to help ‘look after the books’. The hardware business was not really paying.

To make things worse, the manufacturer of another rotary mower of the time appeared to have ‘infringed’ my father’s patent with the cutting plate on their mowers. Ironically, Dad had to prove that his patent design was an improvement to the traditional design. Legal proceedings stretched out over a number of years with the large Australian icon company playing hardball with the High Court Appeal’s process. Finally, my father could not afford to proceed with the appeal. Sometime before the final nail was driven into the coffin, he closed the business known as Toowong Hardware. I think this would have been by 1963 or so.

Life after Toowong Hardware: My father also developed a very basic battery operated electric mower after the closure. His efficient Magic Carpet cutting system meant that the mower worked quite satisfactorily, run on a 12-volt battery. It could cut reasonably sized lawns in one go before it was recharged with a standard charger. He ‘manufactured’ the prototypes under our Tarragindi home. He marketed a hand full of these as Line Mowers but lack of finance and, perhaps, business acumen, led to lack of real success with this very good idea. He operated out of premises in Ipswich Road at Woolloongabba during this time. 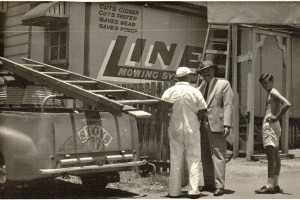 The Ipswich Road store near the Woolloongabba ‘Fiveways’

At the completion of the legal proceedings, my father sold up the Tarragindi family residence and moved to Enoggera. He spent his latter years as a representative for a number of industrial products. This lifestyle of travelling all over the state and into northern NSW was very pleasant and rewarding for him. He loved to meet with people and enjoyed his life on the road. He finally retired in his seventies. He passed away in 2002, aged 86. I think that he was more suited to be employed rather than be the employer.