It was rather dark for 6 o’clock on a summers evening. Clouds circled above with the promise of rain which did not eventuate. The BrizWest Community Ensemble (about 15 in all) had unpacked their brass & percussion to strike out at Carols for a bit of a sing-a-long.
A film screen had been pitched for the scheduled 7pm showing of “Home Alone”. Lying beyond the screen picnic blankets paraded across the grounds with a few wise old chairs for the older sitters behind. Amid all of this, with the children chasing about, the sausage sizzle began. The crowd had swelled just short of 200 and the queues came to quite a length. All remained very well behaved as free Sausages, Coffee & Hot Chocolate were sought. Free Face Painting was also available.

Early in the evening I was introduced to Rick Hedges, who is the current administrator of Little Athletics and the Toowong Harriers. I took this as a good opportunity to present one of my Dad’s old club badges (pictured right) back to the Harriers as a visual icon of their history. My dad was Harold Cook, youngest brother to Jack. The other person of interest I met was my cousin Denis Cook who was in attendance with his wife Helen. Denis was Jack Cook’s son.
What is now known as Jack Cook Memorial Park was originally land that was established as part of Robert Cribb’s Farm (1852). After WW1 it became known as Heroes Park and transferred to the council as a trust to operate as a park.
Currently the park is often used for sports clubs and by personal fitness instructors. One club meets Thursday nights to play cricket and the grounds are frequented by an older citizens walking group (mainly from the retirement village next door). The Little Athletics and the Toowong Harriers both meet in the park and make use of the clubhouse.
An application for it to be gazetted as parkland was made successfully on 1 May 1984 and it was named as Jack Cook Memorial Park. The submission was made by both the Toowong Harriers and the Toowong RSL Sub-branch. Soon after a clubhouse was erected for the Toowong Harriers after which a dedication was given and Denver Beanland MLA officiated its opening.
The reopening of this park was effected by a speech from the Councillor for the Walter Taylor Ward, Julian Simmons, who outlined extensive work done to remove the hazardous rubbish from the topsoil, seal the base clay pan & backfill with fresh topsoil while also providing an inbuilt irrigation system certain to help save time. The remediation was also important, given the 2011 flood damage to the area.
It was noted that completion of the topsoil had not yet been finalized, with the expectation that all would be well over the next three weeks. The ceremony was finalized with a few words from Denis Cook about his father Jack and his long involvement with the club (since 1923 to his passing in 1984) and his desire that there be a home for the Harriers.
Thank you to Jack Cook’s niece Genean Wildesen for writing this report of the event 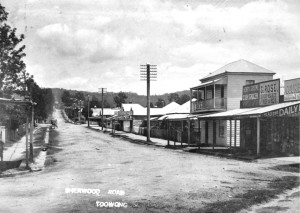 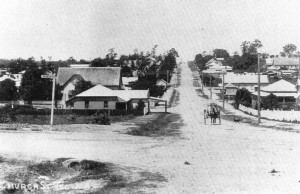