When widowed with three small children, Elizabeth Bailey set out to earn a living and to provide for her family’s financial security. During her lifetime she displayed drive and a willingness to work hard; showed resourcefulness and initiative and was ambitious for her children.

Elizabeth Harpur Bailey (née Tabb) was the daughter of William Whitford Tabb, a Cornish mining engineer, and his first wife, Joanna Trevanna. Various records spell the name as ‘Harpur’ also as ‘Harper’ and ‘Harpeur’. Friends and relations of her generation gave her a pet name and to them she was known as ‘Birdie’. William had migrated to Australia from Cornwall where he managed a number of mines in Cobar. Prior to her marriage to William, Joanna had managed a guest house in Cobar where William had stayed.

Joanna having died, William Tabb re-married, to Mary Ann Johnson and, upon his retirement, bought a property on the northern bank of the Logan River which he called ‘Cornubia Park’, no doubt named after his family home in Cornwall. ‘Cornubia’ is Celtic for ‘Cornwall’ and the Tabb family, a prominent Cornish family from Wennap, Cornwall, held property in Cornwall called ‘Cornubia Park’. Today the suburb of Cornubia is part of the subdivision of the original property. 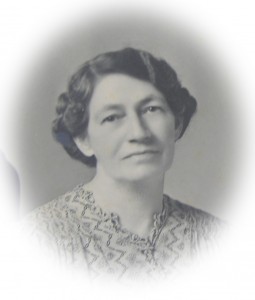 Elizabeth married George Livingstone Bailey, one of ten sons of Southport pioneers Alfred George and Sarah Bailey (their only daughter not surviving childhood). He was a plumber by trade.

Little is known of Elizabeth’s childhood and life as a single woman. She lived and worked in Mitchell or on a property just outside. This is how she met George.

After their marriage, Elizabeth and George Bailey lived at Mitchell where their eldest son, William Whitford Tabb Bailey, was born here on 22 July 1913. George worked as a plumber for a few years there before the family moved to Brisbane in 1915. They had two other children, George Lenova Bailey (b. 25 November, 1915) and Edris Adelaide Bailey (b. 6 May 1918). Only sketchy details about this period are available to the family from this time.

Elizabeth and George settled for a time at Dutton Park and then re-located to Toowong where they lived at 109 Sherwood Road, not far from the then Salvation Army Hall. Sadly, George died of tuberculosis in 1921. Because he died while so young, not much is known by his children about his early life. He seems to have had difficulty finding congenial employment (no doubt exacerbated by the health problems he faced) but he was employed at one stage as a debt collector.

Her son-in-law Ron Archer points out that:

…Life wasn’t very easy for Elizabeth Bailey after she was widowed, as she was left to raise three very small children, aged eight, five and three. She had to battle on, mainly without help. Her eldest son William (known as ‘Bill’) assisted where possible and he had this weight on his shoulders from a very early age. There was no Widow’s Pension in those days, and Elizabeth had to become the breadwinner. While her husband had taken out a life insurance policy, it wasn’t enough to live on, so Mrs Bailey decided to open her own business. She successfully ran a real estate business in Toowong for many years which, as well as bringing up her family, was no mean feat.

Mrs Bailey initially entered into a real estate partnership. The business was located in premises in an arcade situated in the front of the Jubilee Picture Theatre which fronted Jephson Street, Toowong. Later this site became the BP service station in Sherwood Road, Toowong but this has now been demolished. Elizabeth moved her family from the house near the Salvation Army in Sherwood Road to 109 Sherwood Road. This was a large, grand old Queenslander converted into five mainly self-contained flats (with two toilets downstairs). She herself lived in one of the flats. Although it was only a relatively small flat, she took in Ada, her older widowed sister who had lived in Vera Street. The other sister Nell lived next door in a house fronting Warrawee Street. At one time, after she had married, her daughter Edris (along with husband Ron Archer) also lived in one of the flats.

When her real estate partnership broke up, she decided to shift her business office out of the arcade and she transferred her business operations to her residence at 109 Sherwood Road, where she turned the front room into an office, and ran her business from here. In addition to sales, Mrs Bailey’s business offered a property management service which included collecting rent. She traded under her own name, ‘E. H. Bailey’, and she was the first local real estate agent in Toowong. It was not until some time after World War II that suburban real estate agencies started to become established.

Elizabeth Bailey set about securing her family’s long-term financial security by developing an investment property portfolio, and in the process showed great shrewdness and business acumen. By the time she retired, the Bailey family owned a significant investment property portfolio in Toowong, with at least six properties identified (including the house at 109 Sherwood Road). All of the titles were bought as joint-tenants, as she placed her children’s names on the title deeds. Two of her children Bill and Edris, with their respective spouses, bought their family homes from properties which were part of this portfolio.

All of Elizabeth Bailey’s children are now deceased, and of her children’s spouses, only her daughter Edris’s husband Ron Archer is still alive. Her daughter-in-law Pat Bailey died just recently. She is survived by her grandchildren and great-grandchildren. Both Pat and Ron referred to their mother-in-law as ‘Mrs Bailey’, a reflection of a time of more formality in inter-personal relationships than at present when people are more likely to be on a more informal first-name basis with their in-laws. Ron and his sister-in-law Pat were interviewed in 2003 and their memories about Elizabeth not only reveal interesting facets of her personality but also the depth of the respect and fondness that her children’s spouses have for their mother-in-law.

Ron (who was also in real estate) recalls:

Mrs Bailey was very ambitious for all of her children and she did all she could to assist them. My wife used to learn music from a music teacher who lived near Toowong State School in St Osyth Street.…She also learned Art of Speech.

My mother-in-law had shares in Blocksidge and Ferguson…Because of these shares she had a close association with the company. Her family had some shares too…and I attended a few of their Annual General Meetings on behalf of the family.

Mrs Bailey persuaded Bill to stand (I think Bill was reluctant) as an Independent candidate for the Ward of Toowong in the Brisbane City Council election. Although he did not win the ward, he had the highest vote of any independent in that election, so he was well supported and therefore did not forfeit his deposit! The Bailey family was well-known and it was felt generally that Bill would have made a good alderman and would do a good job if he was elected.

With a view to retiring, Mrs Bailey bought a block of vacant land on the corner of Dean and Elizabeth Streets. She built two two-bedroom maisonettes on it and lived in one and let the other. Later she bought the very old colonial cottage next door, the total land (including what had been a tennis court at the back) fronting Dean Street.

Pat Bailey (who married Bill) during WWII adds these memories:

When I first knew her, she operated her office in her house in Sherwood Road…My sister-in-law Edris, who later became Mrs Archer, used to do quite a lot of the work for her.

I had been training as a nurse in the General Hospital but, in those days, if you got married, you had to leave. I wasn’t very happy as a nurse so I wasn’t at all sorry to leave. Some months after I left, a law was brought in that, if you married a soldier, you simply had to go on with your training — but I didn’t finish my training! However, my mother-in-law, who was really very clever at this sort of thing, got me a job in the Taxation Department, so I worked there for the rest of the war. Bill’s mother was very resourceful!

[She] was indeed a very resourceful lady — she would let nothing beat her! She was very, very keen on politics. She belonged to the Queensland Women’s Electoral League (QWEL) and whenever there was an election, she used to go and help, and so on. She was, in fact, the first female member of the REIQ.

She was very good at managing. She could manage anybody’s life — and she did! I found that a little bit difficult to get on with but many years later, I became very fond of her. As a matter of fact, in 1953, Bill stood for the council election as an independent. His mother, of course, supported him in that and quite a lot of the people who had previously supported the Liberal party, came over and supported him. I did a trek all around Toowong knocking on people’s doors…I was a bit scared about the door knocking but I did it anyway. We apparently got quite a lot of votes. Bill didn’t get in…Anyway, we did well enough and Bill didn’t lose his deposit. That was when my mother-in-law and I became real friends — I realised what a fine woman she was.

Elizabeth Bailey passed away in March, 1956. 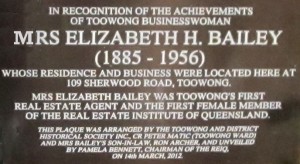 Afterwards, Mrs Bailey’s son-in-law, the late Mr Ronald Archer hosted TDHS members and guests to morning tea at the Toowong Uniting Church, the church attended by Mrs Bailey when she was alive. 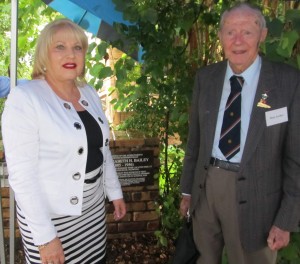