Fond Memories of our family home

Ed Faux has provided the following memories about the Faux family residence, which was located at 57 Dunmore Terrace, Auchenflower.

My father, Eric Faux, purchased the home from a friend of his by the name of Arthur Biggs, (which would have been about 1950-51), who ran a printing company located in the city of Brisbane.
Arthur Biggs had two children, Bruce and Nerada. Bruce was to become Dr Bruce Biggs, who partnered two other doctors in a medical practice at the ‘Fiveways’, Gailey Road, Taringa. This would have been in the mid-1950s. In later years (in the 1970s) they expanded their business to include a small medical practice at the shopping centre in Hawken Drive, St Lucia.
Bruce was also at some time president of the Queensland Branch of the Australian Medical Association.
When the eldest three of Eric’s family of five children had left home, he divided the house into two individual areas and rented the southern side of the house to Mrs Negus and her son George, who later became a well-known journalist and TV commentator.
When the house was divided into two sections, my father had the external walls of the house covered in “Faux Brick”
At that time you could sit on the veranda and watch the sailing or rowing races on the Brisbane River below and looking to the northwest you could see the Milton Tennis Courts. There were no high-rise buildings in the area. 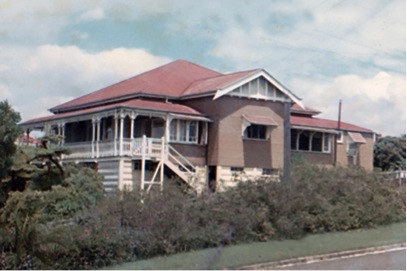 Thank you to Ed Faux for providing these memories of his childhood home, and to his sister Shirley for providing the photo. Shirley’s husband Howard Foley assisted by preparing the print for publication.